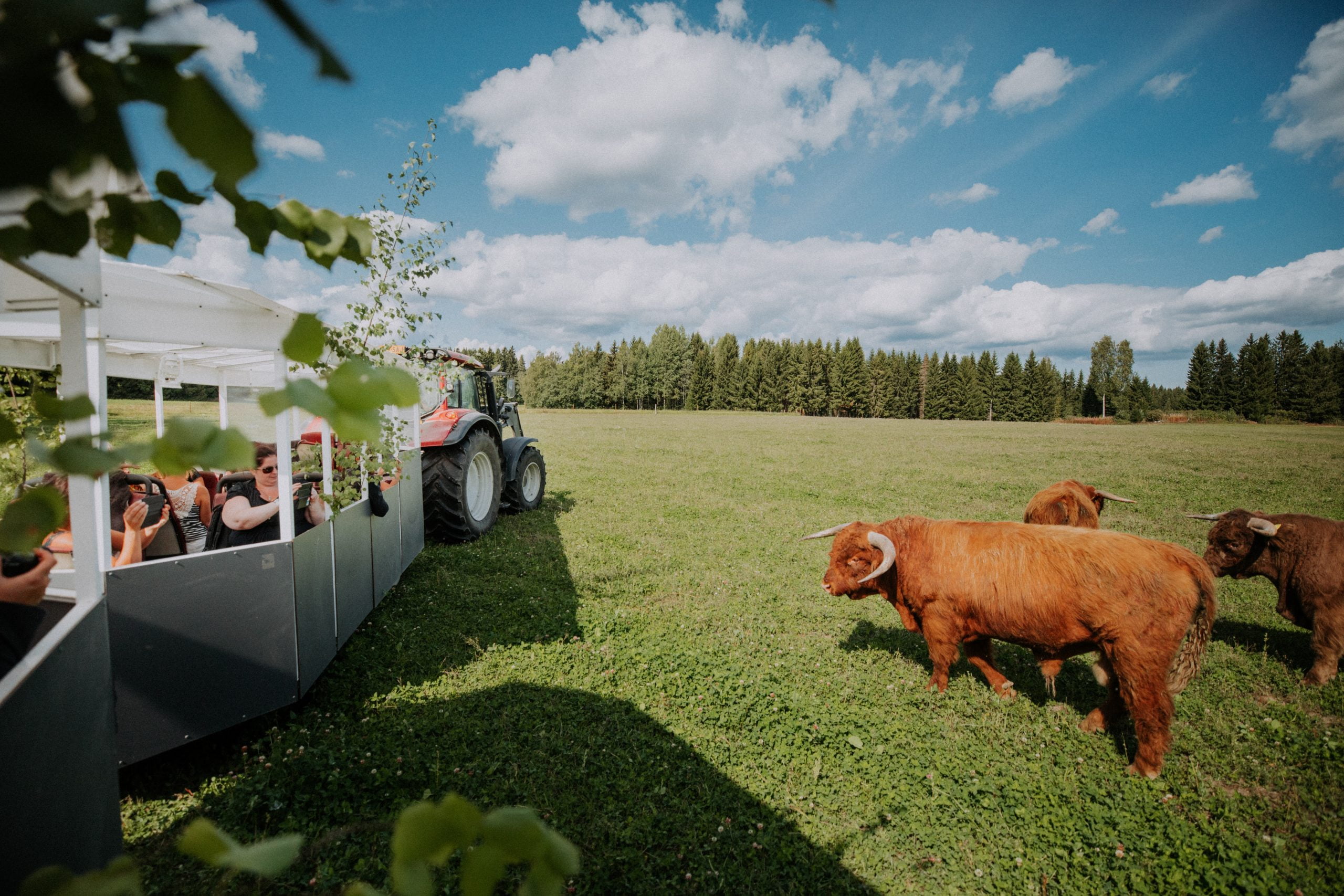 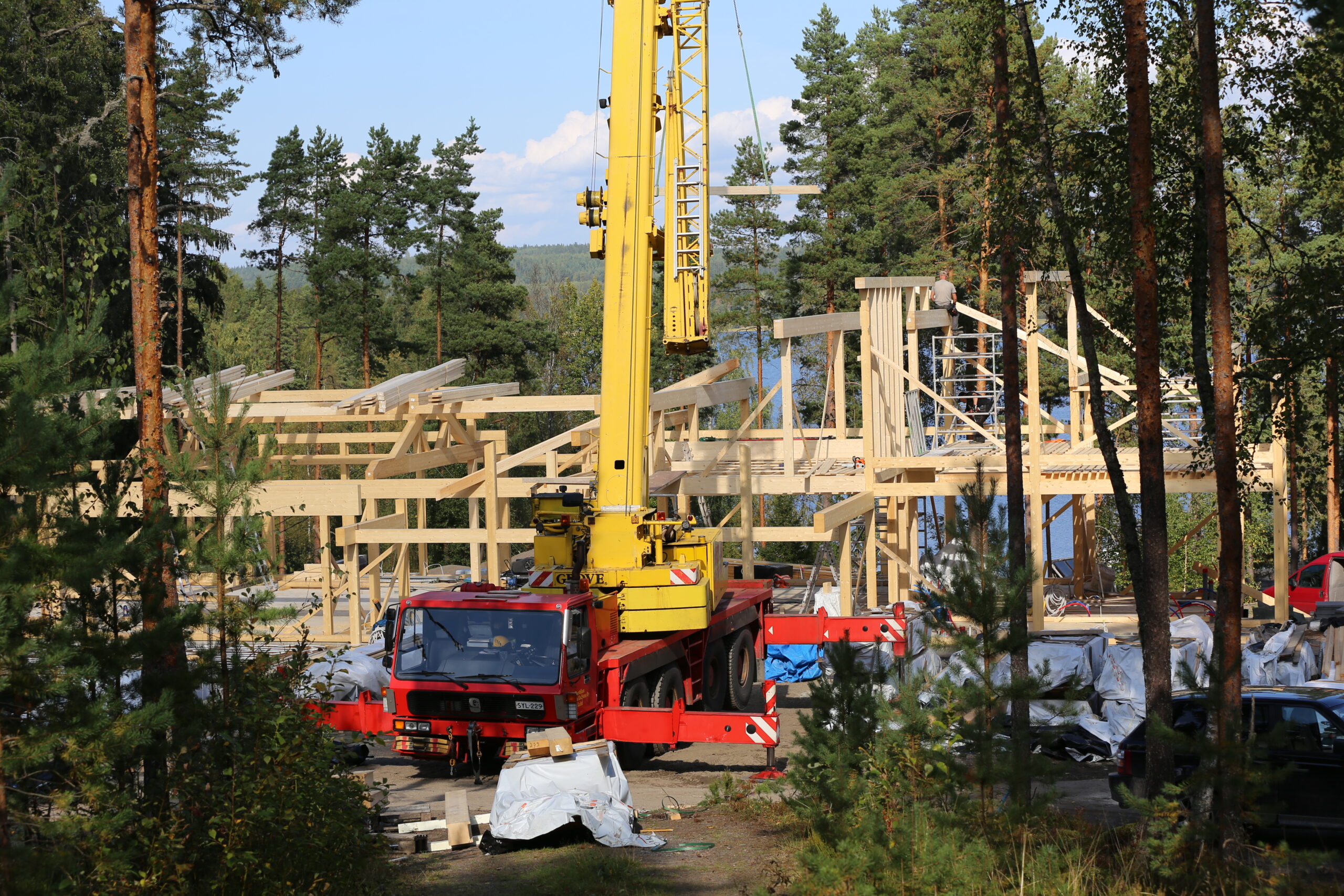 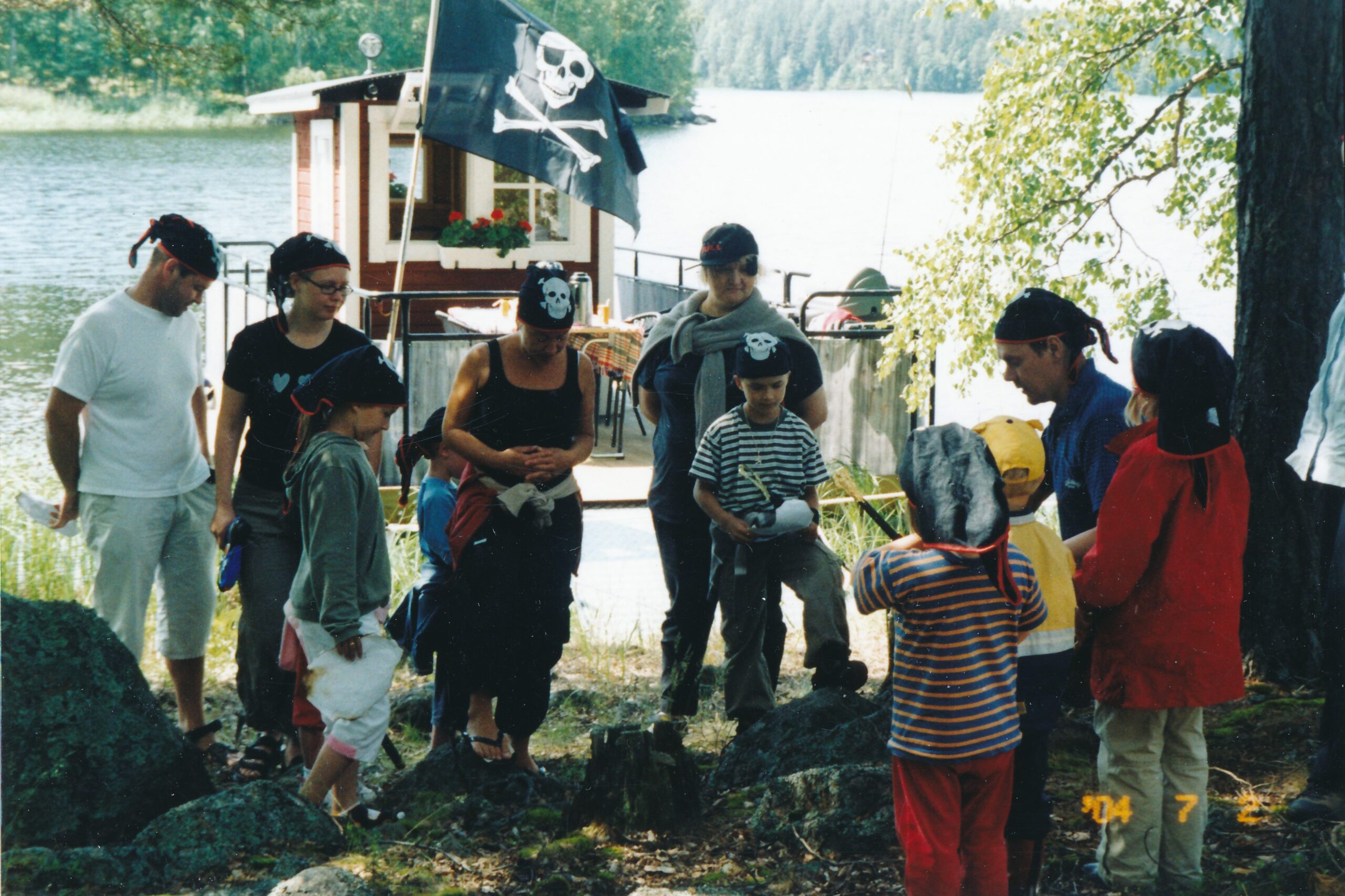 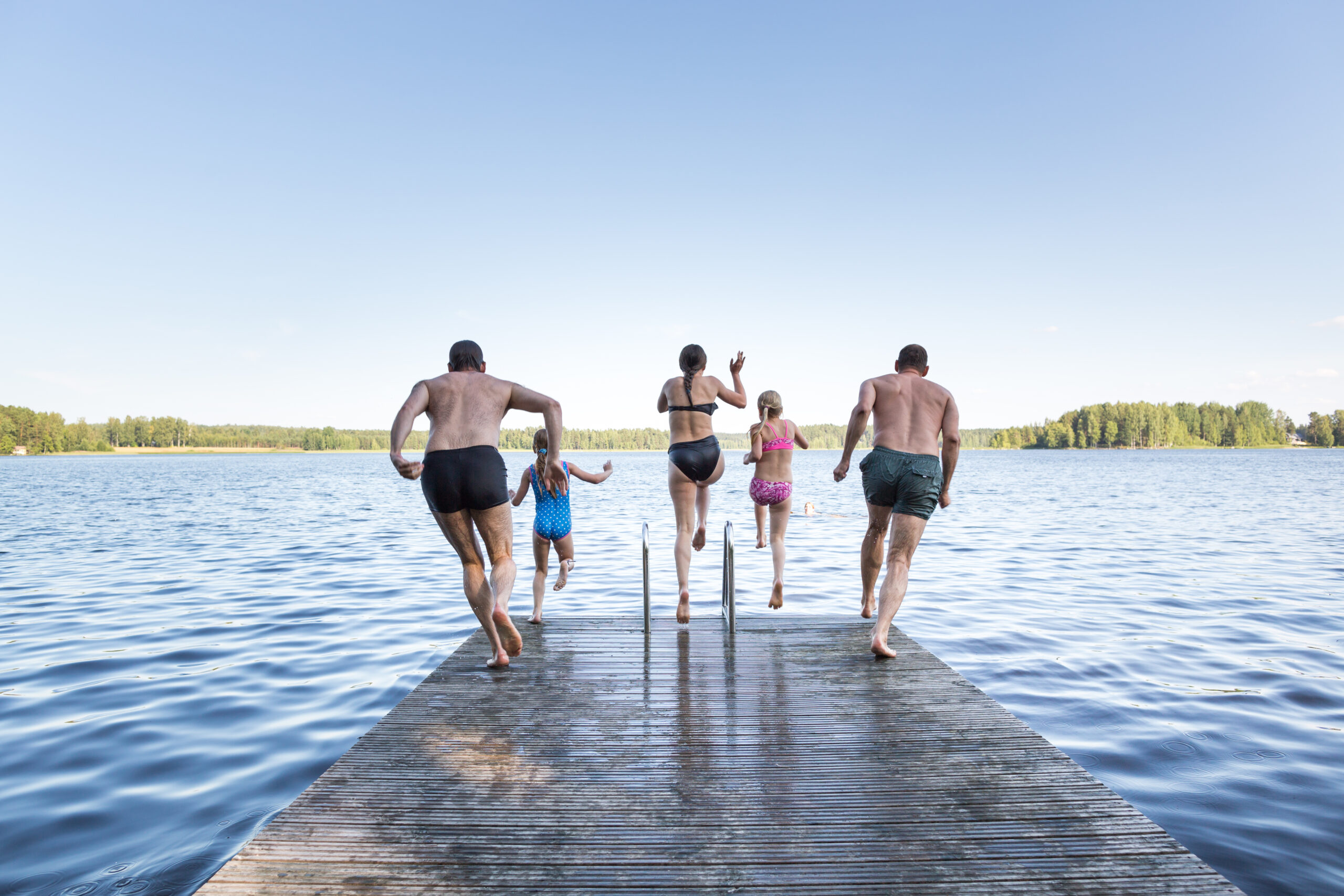 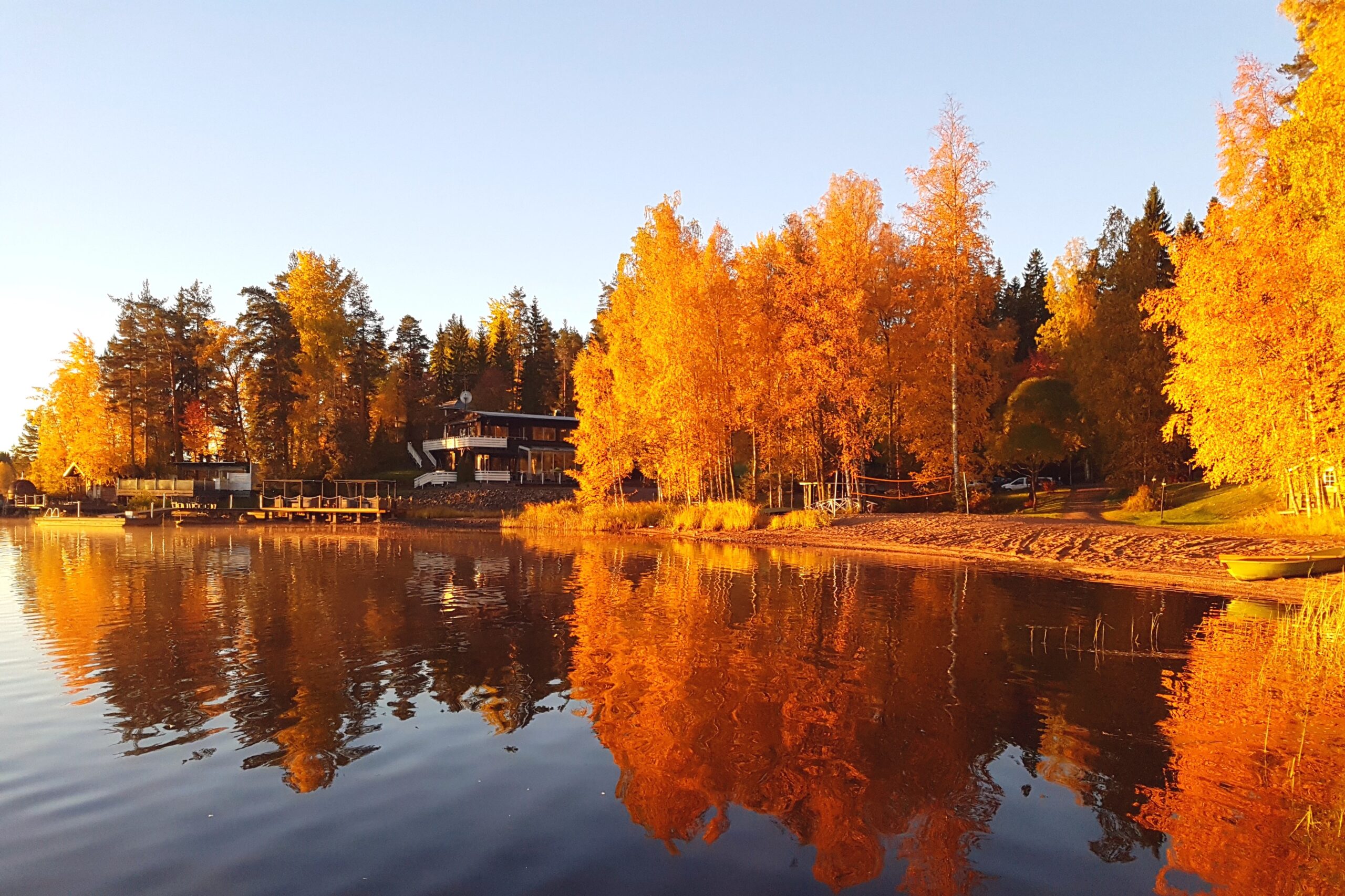 More than 50 years of tourism

Lehmonkärki was already known in past centuries as a place of natural beauty on the shore of Lake Päijänne, and the place got its name from the small-leaved linden growing there. Fishermen and young people from the villages especially remember Haavankallio rock, where people used to gather to spend time. The first steamship in Lake Päijänne, the S/S Suomi, was built at the Vähä-Äiniö Bay in 1856. One of the oldest money caches in Finland, consisting of large Viking copper coins and gold coins, has also been found in the area.

In the mid-1960s, Aune and Antti Yrjölä had a vision that one day people would have more time and opportunities to spend pleasant moments on the shores of Lake Päijänne. A plan for Lehmonkärki was completed in 1967, and by 1970, there were six cottages. Each cottage had a sauna, a combined living room and kitchen, and a sleeping alcove. VIP Villa Isohaapa was completed in 1977. It was used mainly as a sauna and a venue for small family parties.

In the mid-1980s, Ari Yrjölä became the new master of Yrjölä farm and Lehmonkärki. Ari began to develop Lehmonkärki’s business with determination. The three large villas (Aallotar, Ilmatar, and Tuuletar) were completed in 1990–1991. After that, new villas were built almost every year, and the original cottages were demolished. In addition to holidaymakers, the number of corporate events increased year by year. Catering services and auxiliary program offered throughout the year were introduced.

An expansion of VIP Villa Isohaapa was built in 1998, and a dance pavilion was built next to the main building. The Log Castle was completed the following year. New VIP villas were built in the early 2000s, while the Hunting Lodge and Haanokki were completed in 2005.

A project that lasted almost two years was the renovation of an old stone barn into restaurant and meeting venue Ometta. Ometta was inaugurated in September 2006. In 2007–2008, the villas were renovated and refurbished to reflect the current trends. An extension on the ground floor of the main building Isohaapa and a new villa housing 16 people were completed in 2009. A summer café with a license to serve all alcoholic beverages was opened at Midsummer in 2010. In the summer of 2011, a new glass sauna was completed and Villa Aallotar was renovated. In spring 2012, Villa Tuuletar was renovated, while Villa Ilmatar was renovated during the spring of 2013. A wilderness cottage near the Evo hiking area was completed in August 2014. A new conference building, Villa Vellamo, was completed in the spring of 2015. During 2016, the yard areas and the surfaces inside the villas were renovated. New type of accommodation on the water will be completed during the summer of 2020.

Nowadays, around 30,000 visitors come to Lehmonkärki throughout the year. The services are constantly being diversified, and Lehmonkärki has become a high-quality meeting, holiday, and party destination.

We have made use of renewable energy sources in our new and renovated buildings. We have been using geothermal and lake heat for more than 20 years, and in the autumn of 2018, five solar power plants were installed at Lehmonkärki to produce ecological electricity.

Farming has always played an important part in the history of the Yrjölä farm. In the spring of 2018, after a long period of cereal farming, the farm wanted to switch to ethical meat production, and opted for long-horned highland cattle. The cattle graze outside throughout their lives, and are only fed organic feed. From June 2020, the production has been fully organic. Find out more about the values of Lehmonkärki.